Please join me for my YouTube debut with Dave and Jeff on their latest episode of the 2 Half Squads.  We primarily discuss the new HASL "Brevity Assault" from the Italian designers at Advancing Fire.

Posted by Chicago Wargamer at 8:47 PM No comments:

I am pleased to announce that Daniel Kraus' new novel, "The Living Dead" was released in August 2020. Daniel was selected by the Romero estate to complete this epic zombie tale unfinished by George Romero. I had the honor to serve as the book's military history advisor on a wide range of topics that arise in this instant horror classic. 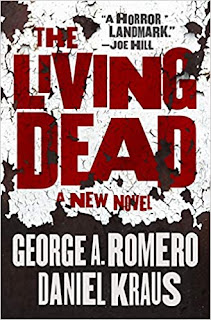 The Living Dead at Amazon.com
Posted by Chicago Wargamer at 8:25 PM No comments:

Listen in while I help Jeff and Dave finally get virtual with their Squad Leading! It only took a pandemic.

Email ThisBlogThis!Share to TwitterShare to FacebookShare to Pinterest
Labels: ASL

As most of our Chicago game groups are quarantined for the duration, I have created an official "Chicago Wargamer" Discord server to facilitate communication and VASSAL game play. Our local community will continue to thrive even in the face of adversity. This week alone we have seen virtual action with ASL, To Take Washington, Space Empires 4x and Imperial Assault. We can only get through this together!
Posted by Chicago Wargamer at 8:32 PM No comments:

Korean War ASL with The 2 Halfsquads

Listen as I discuss with Dave Kleinschmidt, Dave T. and Chris W. our first impressions of the ASL Korean module "Forgotten War" on the lastest episode of Dave and Jeff's podcast. You can actually hear my eyes strain on the recording as I try to read the small font on a particular vehicular counter even with my reading glasses on!

Email ThisBlogThis!Share to TwitterShare to FacebookShare to Pinterest
Labels: ASL

Great Campaigns of the American Civil War "All Green Alike"

Saturday, February 22 was the opening day of our epic multi-player format version of the full Virginia Campaign from "All Green Alike." This module is found in MMP's Stonewall Jackson's Way II. Six players faced off in this 14 day scenario utilizing the two maps from SJWII and the west map from Here Come the Rebels. The situation presented is the opening campaign of the American Civil War in July 1861. Two Union armies face off against their corresponding Confederate counterparts in nearby Virginia theaters. One set of opponents face off outside the gates of Washington D.C., while the others maneuver in the Shenandoah Valley. Each side faces an interesting set of decisions as to how to accomplish their goals.

We completed the first four days of the campaign from July 15 to 18. In the Valley, Patterson's Federals and J.E. Johnston's Rebels quickly and deliberately marched for each other along Mill Creek. Each side launched attacks where local advantages were found, but the end result was stalemate along the line.

McDowell's Union Army of Virginia marched on the direct road toward Bull Run. P.G.T. Beauregard's Confederates contested this advance with a series of sharp battles in a fighting withdrawal. General Keyes' Union command was routed while "Shank" Evens' brigade was obliterated in a massive Union counter-attack. The situation in this sector remains fluid and undecided.

Email ThisBlogThis!Share to TwitterShare to FacebookShare to Pinterest
Labels: GCACW

Dan K. and I recently started Last Chance For Victory's full battle of Gettysburg scenario, Dean Essig's latest regimental treatment of the battle using his Line of Battle series rules. The current edition is a much evolved version of his groundbreaking Civil War Brigade Series most remembered for the use of actual written orders to direct your troop movements. This signature command feature exists here along with a linear combat model that more accurately reflects the way Civil War era engagements played out.  It is also unique in that it is one of the first Gettysburg games to constrain the Confederate player as he approaches the town on the morning of July 1 to better represent the actual historical situation.  A.P. Hill and his boys cannot blitz across the map securing far flung objectives when in reality they barely knew what was over the next ridge.

Here we see Heth's approach to McPherson's Ridge, who by design always opens the battle with his historical decision to send in Archer and Davis' brigades to probe Buford's cavalry screen. As higher level commands start to arrive you begin to develop your own battle plan, but the opening moves of the unexpected meeting engagement set the tempo of the battle in a more appropriate historical context.

Email ThisBlogThis!Share to TwitterShare to FacebookShare to Pinterest
Labels: Gettysburg, Line of Battle Series
Older Posts Home
Subscribe to: Posts (Atom)
Chicago Wargamer honors our shared historical heritage by encouraging camaraderie in the memory of those who have fought and sacrificed. In the spirit of that friendship, you may find some interesting information in these pages on historical boardgaming, local history, battlefield touring, photography and more!